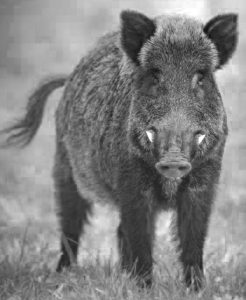 It must be close to a decade now since I made my first conscious pilgrimage. A journey to the Norfolk village of Walsingham. At that point I didn’t even know that pilgrimage was still a ‘thing’. I had read Chaucer’s The Wife of Bath at college. And we had debated the purpose for people making pilgrimages in the middle ages. But by the time I took those tentative steps. Barefoot towards the Slipper Chapel. I was about as far removed from mainstream religion as you could get. So, I was unaware of any modern practise and was surprised to find a thriving tradition.

In fact the purpose for that entire journey was about as far away from Christianity as you could get. So the destination raised more than a few eyebrows. It was the culmination of a prolonged and often confusing contact with a particular spirit. I am not entirely sure what her motivations were in asking me to light very specific numbers of candles in each of the shrines I came across. Other than perhaps to bankrupt me, because votive candles aren’t cheap. But in my heart I suspect it was to install into me what now appears to be a life long fascination with ‘the journey’. And how it is both an act of magick and of devotion that transcends religion. 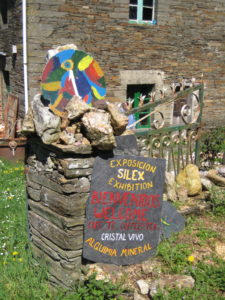 Artists house on the Camino, a stop for pilgrims

Since then I have marvelled at the very beginnings of humanity. At the Cradle of Humankind in the Sterkfontein caves in South Africa I took time to honour my ancestors. I have fallen in love with Lugo a wonderful ancient city on the Camino Primitivo (the original way) heading towards Santiago. There I felt the power of the Great Mother Isis. I have travelled alone from the very Northern tip of France to the Sierra Nevadas in Spain in a personal journey of enlightenment. Left offerings to the Goddess Minerva in an ancient thermal spring. Performed rites to Hekate, Asteria and Perses under a meteor filled sky by a crystal mountain lake. I have followed my nose and communed with the spirits of place in Carnac. Rested on the nearby tumulus St Michel. Stretching my mind far out to sense Glastonbury Tor and St Michael’s Mount far away along the serpentine line.

In recent years the focus of my pilgrimages has been almost singular. The Isle of Yns Môn. I travel along the North Wales costal route, and key points along that journey have become like a mantra. The droning of my engine. The sound of my car tyres on the Tarmac beneath me. Acting like the Buddhist prayer wheels. Rumbling out to the universe my devotion to the landscape around me. And an Island that always feels like home.

So this weekend saw me rise early on a cold and positively wintry morning. With parts of the country caught in the grip of the ‘Beast from the East’ I was uncertain how many would join us in a Pilgrimage to meet the God Manawydan. An event which I helped to organise for members of The Anglesey Druid Order as one of their “Deity Days”. Manawydan is particularly close to my heart as he was the first male deity I ever felt a true connection with.  He reminds me of my own foibles, fragilities and sometimes downright bloody mindedness. He also ensure that I never forget to claim my sovereignty. Nor does he fail me when I have a need for certain types of Magic. But that is another post for another day.

We live in a results based world, where everybody talks in terms of where they went. What they achieved. What they hope to achieve. Always aiming for the final destination. Impatient to be anywhere but where they are right now. Of course I am not perfect and there are many ways in which I still live a thoroughly modern life. But when it comes to my Magick, my Spirituality, I try very hard to take time to enjoy the process. Therefore, my purpose of this day was not to ask him for anything for myself. Just to honour him with each step I took. To facilitate others coming to know him. And hopefully kindle a deeper connection with him.

His location in the Anglesey landscape is without dispute. His story, as we know it, starts with the marriage of Branwen in the 2nd Branch of the Mabinogi. The festivities taking place in the village of Aberffraw. Situated on the south western coastline of the Island. So it was pretty much a no brainer then to walk part of the famous costal path. 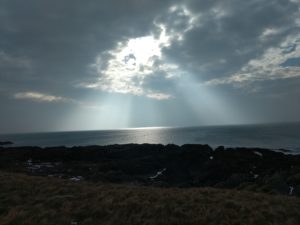 View on the Coast Path

We started from Llyn Coron (Crown Lake), through the village and along the costal path to the ancient city on the headland at the mouth of the estuary. Along the route we contemplated his nature and how it might inform our own actions. We left offerings to him and to the house of Llŷr. And we ritualistically left behind us, in small cairns, representations of that which we felt stopped us embracing Manawydan’s qualities of Humility, Justice and Magic. Particularly in relation to claiming our own sovereignty.

My offering in the humility cairn was a handful of pure white dog whelk and cowrie shells which I always covet when I walk along the sea shore. I had been systematically ferreting them away as we walked. For that stretch of coast line is particularly rich. Treasures to bring home and add to my collection. It pained me greatly when I realised that I couldn’t get more humble than to give away a thing I prized in honour and recognition . 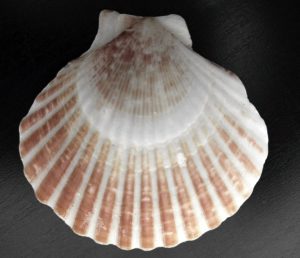 The Scallop, A Symbol of Pilgrimage

So imagine my joy later as we were clearing the beach of plastic when I was rewarded with the most beautiful, almost perfect Queen Scallop shell. A symbol which has become almost universally associated with the act of Pilgrimage thanks to the Camino de Santiago. In my mind a clear sign that Manawydan was pleased with our endeavours.

If you would like to know more about The Anglesey Druid Order and what they do you can find them here and here.